Imagine living a fulfilled life, achieving your goals and thrive every day. Don't settle for a generic life. Commit to thriving by applying lifestyle design.

This is for high achievers who are looking to design their life. To achieve more. To find a better way to combine everything that is important in your life. To get more out of every day and increase your wellbeing. To reduce stress. To get more out of your day, to feel more positive and grateful. To live more in line with your values. To maximize your time and priorities.

This is an actionable, on-demand course designed to build self-awareness and self-leadership with the goal of self-actualization. It focuses on emotional intelligence and designing a life where you live with a greater self-knowledge and personal awareness. When we apply lifestyle design, we excel in our personal and professional life. Regardless if you're a young professional, a seasoned founder or an experienced executive, this course is a way to deep dive into how you can increase your own performance, productivity, and wellbeing – and it always starts with knowing what works best for you today.

To help you kickstart your lifestyle design, we decided to give you one challenge every day for 30 days straight. When we build a strong foundation, we live our lives on our terms.

You will be challenged. You will grow. And at the end of the 30-day challenge, you will have developed a blueprint for how to make better decisions going forward. To start every day by investing in yourself first to achieve more significant results and be able to give more to others.

“Thank you for an amazing course! It's so empowering to become more aware of how our behaviors and environment influence our motivation, productivity, and mood.”

“By living with more gratitude and as a Giver has changed my life. Thanks to Be Brilliant Academy's Lifestyle Design course, I now end each day with a greater sense of achievement, happiness, and impact. I live more in line with my values and the relationships I now create goes beyond a simple connection. Thank you for an incredible course! ”

Yes, I'm ready Free Preview
Watch Intro Video
I'm ready to design my lifestyle Free Preview
Watch Intro Video
Therese Gedda is the Founder and CEO of 30minMBA, a company re-imagining the workplace to enable the Future of Work starting with culture. Beyond running the award-winning company, Therese is a seasoned international Keynote Speaker on topics including Future of Work, business culture, workplace engagement, entrepreneurship, design thinking, and the entrepreneurial mindset. For over 15 years, she has inspired tens of thousands of people all over the world including New York, Toronto, San Francisco, Boston, Venice, Lisbon, London, Paris, Dublin, Stockholm, Barcelona, Amsterdam, Helsinki, and in the Bay Area.

At the age of 17, Therese started her first management consulting company, and over the last 15 years, she has supported thousands of founders, management teams and executives. At the age of 21, she became a guest lecturer at Stockholm School of Economics and The Royal Institute of Technology. Therese holds a Master of Science in Business and Economics from Stockholm School of Economics and has been awarded Sweden’s largest prize for innovators in memory of Alfred Nobel.

Today, Therese is advising leading companies worldwide in re-designing their culture. She also works as a Performance and Achievement Coach to Founders and C-level executives globally to excel as high achievers. Additionally, Therése spends a significant amount of her time traveling as she frequently is invited to speak about The Future of Work at conferences all over Europe and North America. 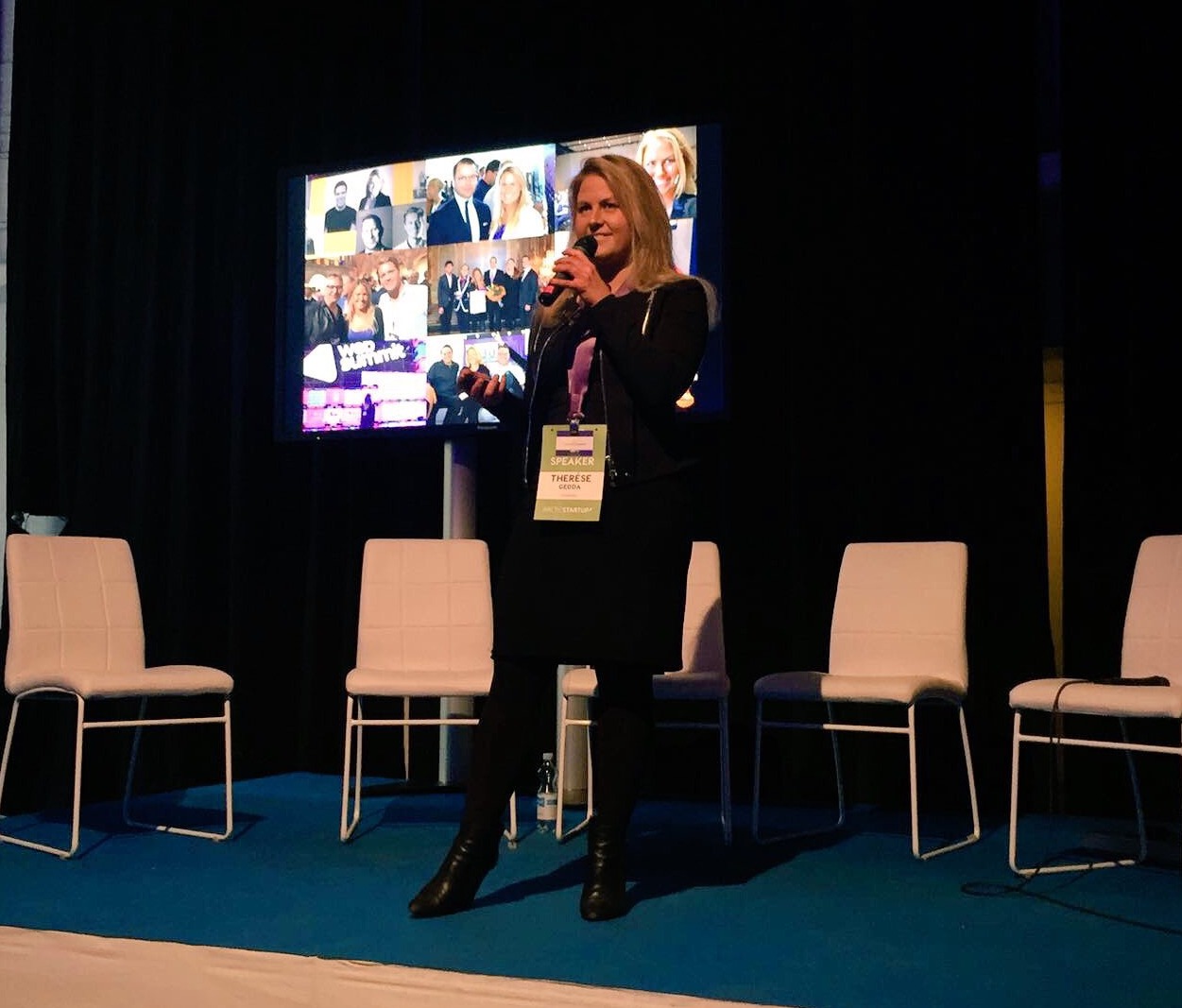 * Source: Paper: ‘Happiness and Productivity’ by Andrew J Oswald, Eugenio Proto and Daniel Sgro. Article: 'Purpose in Life as a Predictor of Mortality Across Adulthood' by Patrick L. Hill and Nicholas A. Turiano.

We suggest moving this party over to a full size window.
You'll enjoy it way more.
Close
Go Fullscreen