Imagine waking up full of energy and anticipation about what this day will bring. You’re starting your day with an empowering morning routine that gives you greater clarity and insight about your priorities for the day ahead. When you arrive at your workplace, you feel energized and dive right into the most important priorities of the day with great focus. You love what you do, and you easily get into a state of flow as your work is meaningful and stimulating to you. You meet with your team and ensure that they feel supported by you as a leader and know how their work connects with the long-term vision of the company. Time flies where an hour feels like a minute, and you feel a great sense of accomplishment. Lifestyle design is center in everything you do so you live in line with your values, achieve your goals and have time for the things in your life that matter to you. You thrive. As a High Achiever, you aim to achieve greatness and to continuously grow. At the end of the day, you close your eyes with a feeling of gratitude and fulfillment.

Now, are you the High Achiever in this story or does your current story sound a little difference? Regardless of where you start today, getting greater clarity into your values, goals, and priorities is the foundation of lifestyle design. When we align our mindset and actions with what matters to us the most, we thrive. Performance and Achievement Coaching is designed to help you achieve that. To maximize your performance. To achieve your goals. To excel as a leader. To make the right business decisions to grow your company. Just imagine feeling a greater sense of clarity, direction, and excitement every day.

All our one-on-one coaching sessions are personalized and focused on empowering you to come closer to your full potential. The sessions are not only targeted on your role as a leader and High Achiever but can also include exploration and conversations on your company's culture, growth strategy, and operating model.

We are uniquely focused on you, the High Achiever and aim at transformative change on a professional and personal level using effective techniques from mentoring, advising and coaching combined. You will be meeting Therése personally on a video call on appear.in or FaceTime.

This package is designed for you who want to try out Performance and Achievement Coaching for a total of 3 hours during 3 one-to-one sessions.

Get started
Watch Intro Video
Therese Gedda is the Founder and CEO of 30minMBA, a company re-imagining the workplace to enable the Future of Work starting with culture. Beyond running the award-winning company, Therese is a seasoned international Keynote Speaker on topics including Future of Work, business culture, workplace engagement, entrepreneurship, design thinking, and the entrepreneurial mindset. For over 15 years, she has inspired tens of thousands of people all over the world including New York, Toronto, San Francisco, Boston, Venice, Lisbon, London, Paris, Dublin, Stockholm, Barcelona, Amsterdam, Helsinki, and in the Bay Area.

At the age of 17, Therese started her first management consulting company, and over the last 15 years, she has supported thousands of founders, management teams and executives. At the age of 21, she became a guest lecturer at Stockholm School of Economics and The Royal Institute of Technology. Therese holds a Master of Science in Business and Economics from Stockholm School of Economics and has been awarded Sweden’s largest prize for innovators in memory of Alfred Nobel.

Today, Therese is advising leading companies worldwide in re-designing their culture. She also works as a Performance and Achievement Coach to Founders and C-level executives globally to excel as high achievers. Additionally, Therése spends a significant amount of her time traveling as she frequently is invited to speak about The Future of Work at conferences all over Europe and North America. 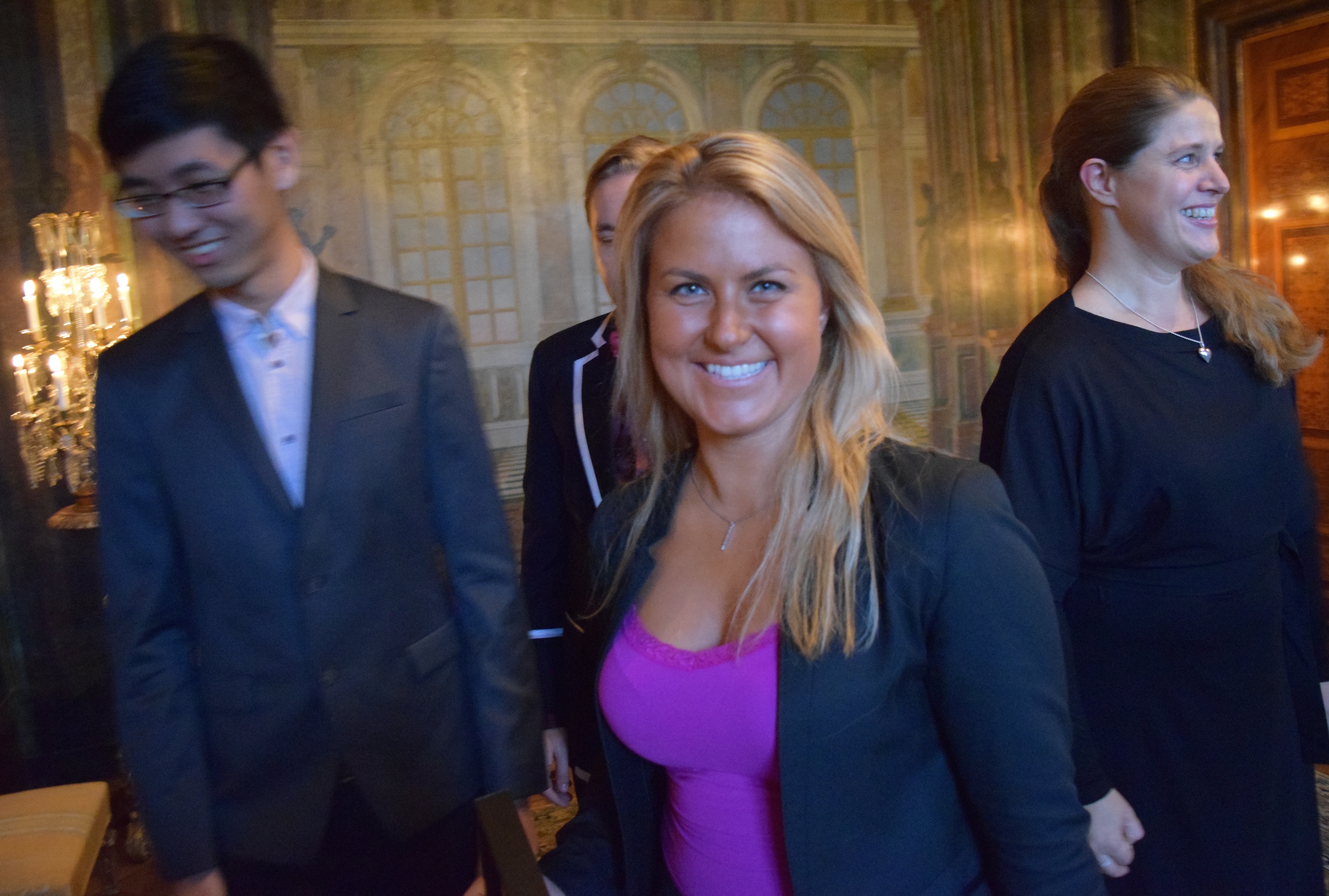 “Therése is an extraordinary entrepreneur and international motivational speaker. A conductor of energy and magnetism, she engages audiences through her passionate performances, providing audiences with immediate and actionable insights. Combining her background in elite fitness and her extensive professional experience, Therése has motivated people all over the world to reach their goals in both their personal and professional lives.”

“Therese is a very talented, sharp and competent professional who is extremely passionate about her work and making a difference. She has acquired immense knowledge through her experience as a serial entrepreneur and international speaker. This unique combination of personal experience and scientific research is what has made her, her business and the people around her so successful. I believe she is an invaluable mentor, speaker and, advisor.”

“Therése has the ability to create magic – constantly, it seems. With loads of creativity and determination, Therese has demonstrated a remarkable ability to create exceptional value. She is a phenomenal startup CEO, an incredible leader and she has an amazing passion for empowering individuals to reach their fullest potential. I'm proud to vouch for her, because I've seen from the inside how she works and what she does to always deliver - both on stage as a keynote speaker and behind-the-scenes in business. Therése is extremely talented across the board and with her determination, no industry is safe from disruption.”

“Being a strategic advisor of 30minMBA, I have had the great opportunity of working together with Therese. She is an amazing person and an exceptional leader who has built several companies from scratch. She started her entrepreneurial journey as a 17-year-old, founding a management consultancy company successfully working with startups and fast-growing firms for over a decade. With almost 15 years as a founder and keynote speaker, she is one of the most talented individuals I have ever met. Therese has a great passion for entrepreneurship with a remarkable degree of commitment to her projects. The dedication to getting things done, the passion for challenging the status quo and empowering people to greatness, makes her an extraordinary inspiration for myself and other founders.”

“Highly driven, goal-focused and with an extraordinary degree of commitment to her projects. She can handle the grit of being an entrepreneur – not being someone to quit or easily doubt her ideas or vision. She wants to bring about change and engages the people around her in her ideas. She is also an advocate of entrepreneurship and has helped countless people on their path to building their business. I count her among the most inspirational and brilliant people I have the fortune to know.”

“Therése is an extraordinary individual with a great drive. She has an exceptional ability to quickly grasp new information and converting it into concrete actions. She is also an exceptional facilitator and contributor: sharing her extensive knowledge with high energy and charisma, paired with professionalism and a genuine interest in making individuals excel. Therése is truly phenomenal at empowering people.”

We suggest moving this party over to a full size window.
You'll enjoy it way more.
Close
Go Fullscreen